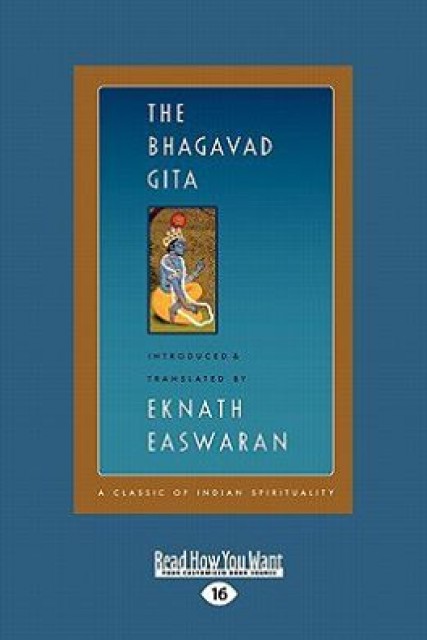 The Bhagavad Gita: one of three new editions of the books in Eknath Easwaran’s Classics of Indian Spirituality series ”On this path, effort never goes to waste, and there is no failure. Even a little effort towards spiritual awareness will protect you from the greatest fear.” – Bhagavad Gita (2:40) The Bhagavad Gita, the ”Song of the Lord, ” is India’s best-known scripture. For Easwaran, it was a personal guidebook, as it was for Mahatma Gandhi. The Bhagavad Gita opens, dramatically, on a battlefield. Prince Arjuna is on the brink of an apocalyptic war that he doesn’t want to fight – and he turns in anguish to his spiritual guide, Sri Krishna, for answers to the fundamental questions of life. Arjuna’s struggle is profoundly modern. Easwaran’s genius is to show us that ”the battlefield is a perfect backdrop, but the Gita’s subject is the war within, the struggle for self-mastery that every human being must wage.” And Sri Krishna’s sublime instruction, on living and dying, working and loving, on the nature of the soul, is as relevant to readers today as it was at the dawn of Indian history.

‹ The Places That Scare You: A Guide to Fearlessness in Difficult Times
The Dhammapada ›
Book Recommendation

This Time I Dance! – Creating the Work You Love